Turkey In Turmoil After Tanks Roll Out To Stop Deadly Protests; Stocks Tumble 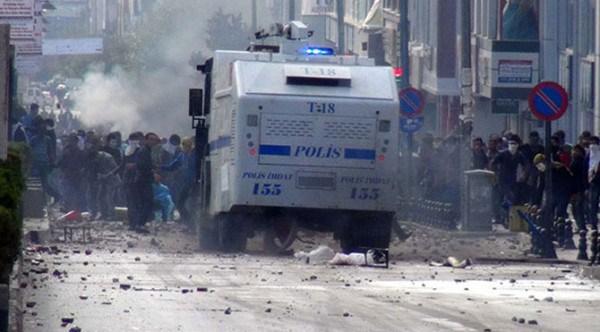 While geopolitics has largely dropped of the front news page, replaced by updates on the global Ebola epidemic (which until recently was considered nothing but fear mongering by those who prefer to avoid reality ews until it is far too late), things in the Middle East are getting worse, and while the US attack against ISIS has achieved absolutely nothing (in fact, the revelation of US strategies may have facilitated the incursion of ISIS into the town of Kobani, a mostly Kurdish city in north Syria), the latest geopolitical hotspot over the past few days has become NATO member Turkey (we provided a big picture summary in “Turkey, The Kurds And Iraq – The Prize & Peril Of Kirkuk“). It is here that violent clashes broke out across the southeast of the nation with several people reported dead and curfews imposed, as the region’s Kurdish people protested the advance of Islamic State just across the border with Syria.

As Bloomberg reports, demonstrators clashed with police and in some areas with members of local Islamist groups, according to Turkish media. Haberturk website said that five people were killed in Diyarbakir, Turkey’s largest Kurdish city. A curfew was imposed there at 10 p.m. local time as well as in Mardin, Siirt, Batman and Van, according to Hurriyet newspaper.

The reason for the anger:  Syrian Kurdish fighters are battling to prevent Islamic State militants from overrunning Kobani, a mostly Kurdish city in north Syria a couple of miles south of the Turkish border. Kurds have blamed the Turkish government for not doing enough to help the Kurds of Kobani.

As a result, Twitter is overrun with photos such as the following:

Thousands of protesters on Taksim square after riot police withdrawal

Riot police in Istanbul are withdrawing from Taksim Square and allowing the mass protest to continue unabated, Turkish state media reports. Istanbul and Ankara are seeing a second day of violent protests, with tear gas and water cannons being deployed.

Minor scuffles broke out after protesters lobbed fireworks at officers as they were drawing back, the state-run Anadolu Agency reports. Police removed barricades around the square, located in the heart of the city, which had previously been erected to prevent the anti-government protests, Private Dogan news agency said.

Despite the authorities decision to allow tens of thousands to flood onto the square, the main subway gateway to Taksim, the central station in the city’s metro network, has reportedly been shut down in an effort to keep more people from reaching the ongoing protests.

Earlier the bridge over the Bosphorous Strait in Istanbul was blocked by thousands of protesters heading west from the eastern part of the city in an effort to reach the centrally located square, which has been cordoned off by police.

More than 11,000 refugees fled Syria on Friday, in what is thought to be the highest daily exodus since the insurrection began 19 months ago.

At least 9,000 of those fleeing the unrelenting violence in Syria headed for Turkey and Jordan, who are both warning that refugee numbers could soon overwhelm them.

The first large winter storm of the season made the journey miserable for the new arrivals in Turkey. Torrential rain along much of the eastern Mediterranean coast is not forecast to let up throughout the weekend, after which temperatures are expected to sharply chill.

On October 3, 2012  the Turkish military launched repeated mortar shellings inside Syrian  territory. The military action, which was used by the Turkish military,  conveniently, to establish a ten-kilometer wide no-man’s land “buffer zone”  inside Syria, was in response to the alleged killing by Syrian armed forces of  several Turkish civilians along the border. There is widespread speculation  that the one Syrian mortar that killed five Turkish civilians well might have  been fired by Turkish-backed opposition forces intent on giving Turkey a  pretext to move militarily, in military intelligence jargon, a ‘false flag’  operation.

According to one  report since 2006 under the government of Islamist Sunni Prime Minister Recep Tayyip  Erdoğan and his pro-Brotherhood AKP party, Turkey has become a new center for  the Global Muslim Brotherhood. A  well-informed Istanbul source relates the report that before the last Turkish  elections, Erdogan’s AKP received a “donation” of $10 billion from the Saudi  monarchy, the heart of world jihadist Salafism under the strict fundamentalist  cloak of Wahabism. Since the 1950’s when the CIA brought leading members in exile of the Egyptian  Muslim Brotherhood to Saudi Arabia there has been a fusion between the Saudi  brand of Wahabism and the aggressive jihadist fundamentalism of the  Brotherhood……………………….