With All Eyes Again On Draghi, This Is What Remains In The ECB’s Toolbox

As Eurostat surprisingly reported earlier today, Europe has once again descended into deflation, and not just due to sliding energy prices but also in the core inflation rate, which strips out the volatile items of energy, food, alcohol and tobacco, and which was also weak falling to 0.8% from 1%.

Still, as Reuters observes, “although consumer spending, virtually the only engine of growth, is holding up relatively well, an array of weak business sentiment surveys and poor PMI data indicate that the 19-member currency bloc is increasingly suffering from the emerging markets slowdown.”

As a result, today’s deflationary report, the worst since the start of Europe’s QE, virtually assures another substantial round of policy easing from the European Central Bank on March 10.

Nordea economist Holger Sandte, cited by Reuters, said that “deflation would be a disaster for the euro area as the burden of high debt would increase. Therefore, the ECB will continue easing monetary policy significantly. But no matter what the ECB decides to do on 10 March, inflation is likely to hover around zero during the next few months before it picks up – if oil prices behave well.”

It’s not just analysts: Bank of France Governor Francois Villeroy de Galhau, an influential member of the ECB’s Governing Council, warned over the weekend that the central bank would have to act if the low energy prices appeared to have long-term effects.

As Reuters adds, the worrisome inflation print comes just days after the G20 meeting of the world’s top economies warned that leaders needed to looks beyond ultra-low interest rates and printing money to shake the global economy out of its torpor.

Still, the meeting failed to outline any bold steps and even called on central banks to maintain accommodating policies as weak Chinese growth weighs on all top economies and low commodity prices raise the specter of deflation.

This, until the surprising PBOC RRR cut, had pressured US equity futures into a lower open until a the traditional pre-market open ramp pushed futures into the green.

In any case, as we said last night when summarizing the post-G20 landscape, “the next big move in the market is now entirely in Mario Draghi’s hands” after quoting Citi’s Steven Englander:

The ECB is in focus. EZ is undershooting on growth and inflation, and ECB President Draghi has been impassioned on the need to provide more stimulus. If they lowball or grudgingly meet expectations, we could face another December 4 move because market participants will see it as the equivalent of a ‘last ease in the cycle announcement’, basically ECB throwing in the towel. If they move aggressively (and take measures beyond vanilla QE and 10bps on rates), they will catch market off guard and unwind the view that policymakers see themselves as powerless.

This has prompted speculation just what it is Draghi will announce in 10 days:

What have we ? the he same old politicians who are responsible for the collapse of the Irish dream of independence in the first place: These dinosaurs and sell out’s have the money behind them and I suspect Brussels and the ECB  will dictate who we are going to have rule over us for the next five years! THE RECOVERY – (PLUNDER) MUST GO ON! 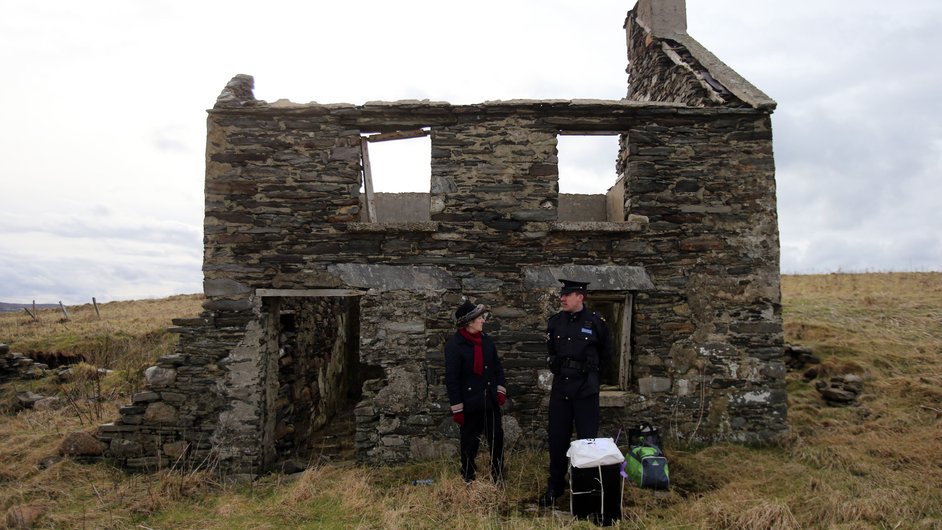 Thinking of coming back to Ireland?  Dont, NOTHING has changed and the same old musical chairs politicians are still in charge : The people of Ireland were forced to pay 48% of Europe’s banking collapse all because our politicians were all bought off  and these same politicians have now been re elected to the sham Dáil !Taxes and corruption will be rampant and we might see the return of the Galway developer tents ! Disgusted !Most people haven’t shaken off the house slave mentality ! Maybe the next time we might see real change and we might get people in to the Dail who will fight the ECB and Brussels and take them to the international court of Justice and get our stolen natural resources back and our plundered national pension funds along with the billions we paid on interest on an “ODIOUS DEBT”currently running at 9,300,000,000 Euro each year for the last 5 years

God save Ireland from the Gombeens in the Dáil

Photo depicts the returning officer with the ballot box from Inishbofin; (source https://twitter.com/rayodonnchadha)

Wicklow Politics back to the old ways???

Stephen Donnelly trying to build a home is OK.

But meeting with council planners to try zone the land around where you propose to build as a parkland so nobody else can apparently block your view isn’t OK.

Its very easy to view this as bordering on abuse of public office. Luckily for him the council saw sense and rejected his planning application twice.

I do hope we are not looking at more of the same type of shady political shenanigans we’ve gotten used to with some Wicklow public representatives:

The people of Ireland will have to wait again for the next election to get the changes we really need : How sad

One of the Most Corrupt Industries on Earth – the Cancer Industry

The Red Chip casino took another one of its patented 6.5% belly flops last night. In fact, more than 1,300 stocks in Shanghai and Shenzhen fell by 10%—the maximum drop permitted by regulators in one day—–implying that the real decline was far deeper.

This renewed carnage was the worst since, well, the last 6% drop way back on January 29, and It means that the cumulative meltdown from last June’s high is pushing 45%. And all this red chip mayhem did not come at an especially propitious moment for the regime, as the  Wall Street Journalexplained:

It comes at an awkward moment for the Chinese government, which is hosting the world’s leading central bankers and finance ministers starting Friday. China has been expected to use the G-20 meeting to address global anxiety about its economy and financial markets. Worries about China’s economic slowdown and the volatility of its markets have weighed on investment decisions around the world.

But if we are remarking on “awkward”, here’s awkward. The G-20 central bankers, finance ministers and IMF apparatchiks descending on Shanghai should take an unfiltered, eyes-wide-open view of the Red Ponzi fracturing all about them, and then make a petrified mad dash back to their own respective capitals. There is nothing more for G-20 to talk about with respect to China except how to get out of harms’ way, fast.

China is a monumental doomsday machine that bears no more resemblance to anything that could be called stable, sustainable capitalism than did Lenin’s New Economic Policy of the early 1920s. The latter was followed by Stalin’s Gulag and it would be wise to learn the Chinese word for the same, and soon.

The regime is in a horrendous bind because it has played out the greatest credit spree in world history. This cycle of undisciplined, debt-fueled digging, building, spending and speculating took its collective balance sheet from $500 billion of debt in the mid-1990s to the $30 trillion tower of the same that now gyrates heavily over the land.

That’s a 60X gain in debt over just two decades in an “economy” that has no honest financial markets; no legal system and tradition of bankruptcy and financial discipline; and a banking system that functions as an arm of the state, cascading credit down from the top in order to “print” an exact amount of GDP each month on the theory that anything that can be built, should be built in order to hit Beijing’s targets.

If an economy and its ruling regime were an animate being you could call it a “fatal addiction” and be done with it. These folks are on the deadliest strain of financial heroin known to mankind and have no chance of surviving; its a dead economy walking.

Look no further than the hideous debt gains reported for the month of January. Total social financing rose by 3.42 trillion yuan or a round one half trillion USD.

That’s right. On top of it tottering $30 trillion debt tower China has just piled on new debt at a $6 trillion annual rate or 55% of GDP per year!

By now China’s businesses—–especially the giant SOEs (state owned enterprises)—— are drowning in excess capacity and unpayable debt that amounts to upwards of 180% of GDP (compared to 70% in the US). But never mind. New loans to the business sector in January were up by 73 percent over prior year.

Worse still, it is evident that a high share of January’s lunatic rate of credit expansion was devoted to paying interest on the existing monumental debts of China’s businesses and so-called local government financing vehicles (LGFVs).  Even the authorities concede that more than 60% of new debt issuance in recent years has been used to pay interest. They are chasing their tail ever more furiously; they are strapped on to a debt whirligig they can’t and won’t get off…….until it finally explodes.